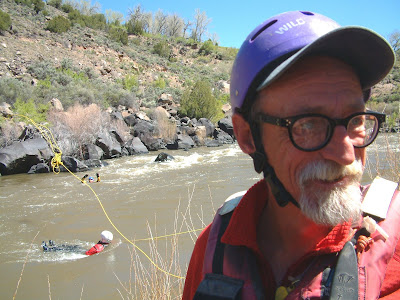 River runners are gearing up for another season of thrills and spills on the state’s biggest river after having just completed three days of swift water rescue training on the Rio Grande near Pilar.

Bobbing up and down in the swift moving, muddy water, several students in brightly colored gear waved their arms and shouted for help as others on the bank pitched ropes to them.

“At a gut level people know this is dangerous, that’s why they get a rush out of it,” Steve Harris, yelled over the roar of the river. “And that’s why we do these classes, to minimize the risks and be prepared and well trained in the event something does happen.” 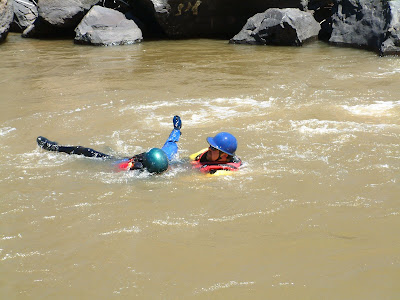 The three-day course teaches and tests students on various swimming and rescue skills, how to handle boat flips and entrapments, rope- and knot-tying and other aspects of safe river rafting, said Harris, 61, of Far Flung Adventures, who has been guiding and instructing on the river for over thirty years .

“This is good,’ said Barbie Trujillo, 27, of Taos as she emerged wet and grinning from the water. “I’m gaining a real perspective of what the guides go through daily.”

Trujillo is the office manager for Native Sons Adventure Co. of Taos, just one of several permitted operators that provide guided, rafting trips on the Rio Grande.

Harris said the rafting industry on the Rio Grande and Rio Chama generates about $7 million in gross receipts each year and directly employs about 200 people. Its overall economic contribution is pegged at closer to $25 million, he added.

The Bureau of Land Management which oversees the rafting industry on both rivers in northern New Mexico requires at least one certified swift water rescue trained guide per trip and guides must be recertified every three years, Harris said.

Guides must also be certified in first aid and cardiopulmonary resuscitation as well as have proven experience behind the oars.

Harris also conducted a one-day refresher course for guides that attracted another 14 students the day following the three-day course and expects other operators in the industry are doing the same to be prepared for the upcoming season. During the season operators will continue to minimize the risks by screening clients to determine their swimming ability and experience as well as other criteria to determine if they’re qualified to ride, especially demanding stretches such as the Taos Box and the Race Course, Harris said.

Customers who end up riding the waves with a licensed operator also receive pre-trip instruction on rafting safety including defensive swimming, self rescue, re-boarding an overturned raft, avoiding entrapment, use of a lifeline and other safety techniques, Harris said.

“It’s all about minimizing that risk,” he stressed. 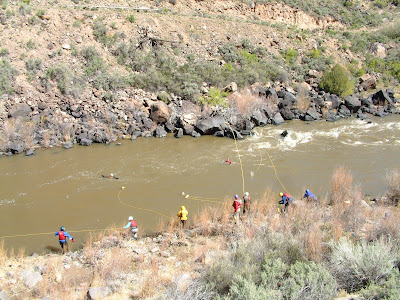 That year Carolyn Whalen, a 61-year-old from Heber City, Utah, drowned during a commercial rafting trip on the Rio Grande while Airman 1st Class Jacob P. Hampson, 23, of New York state, died on a military, rafting excursion near Pilar.

It is expected that with current snow pack conditions hovering around their average this year that the river will be flowing at a more moderate pace thus lessening some of the risk associated with river running.

Nonetheless rafting enthusiasts will find all the thrills they can handle during the prime rafting season from now through June.

Thrill seekers need look no further than the Rio Grande’s “Race Course” section for five of the wildest, wettest miles of fun on the state’s biggest river where they can find plenty of experienced outfitters willing to take them downstream through this scenic stretch of river off State Road 68 between Espanola and Taos.

During a typical spring runoff in June spectators can be seen lining the highway to watch the brightly colored rafts and their ecstatic passengers plunge through towering waves of whitewater generated in this steep sided canyon.

And those looking for even bigger thrills can inquire with operators about running the Taos Box, 17miles of river known for its hair-raising rapids and jaw dropping plunges which produces a ride amusement parks can’t rival. 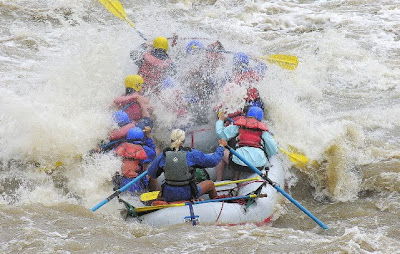 But Harris of Far Flung Adventures thinks that maybe the industry needs to rethink its promotion of these high-water, death-defying rides.

“We probably need to tone down that emphasis because there is such a thing as a self-fulfilling prophecy,” Harris said.

Harris said the rafting industry, the public and the environment might benefit more from a mellower river experience like a slow, scenic float down the Rio Chama or a lazy, summer day’s trip through Orilla Verde Recreation Area on the Rio Grande above Pilar.

“I think as time goes by more people are going to be hungry in their souls for that kind of contact with nature,” he said.

Harris is also director of the non-profit, stream flow and watershed advocacy group, Rio Grande Restoration. He lives on the river in Pilar with his daughter, Viola. 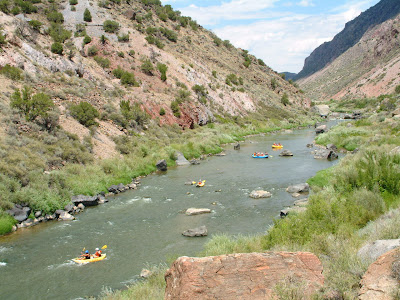 Rafters and kayakers on the Rio Grande near Pilar, New Mexico.

More information about the river and its opportunities, including a list of licensed operators can be found at the Bureau of Land Management’s Rio Grande Gorge Visitor Center in Pilar or by going online to www.blm.gov and browsing the recreation section under the Taos field office tab.

If You Go. The primary “put in” for rafters is located on St. Rd. 68 at Pilar near the BLM’s visitor center while the newly remodeled “takeout” is located several miles downstream at the Taos/Rio Arriba County line. From Santa Fe take U.S. 84/285 north to Espanola, stay on Riverside Drive through town and proceed on St. Rd. 68 through the canyon north towards Taos. About 62 miles one way.