Taxidermy Shop in Heart of Albuquerque a Wild Adventure 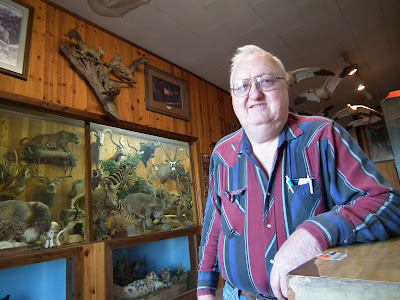 “It’s my own little museum,” D.L. Gruben of American Wildlife Taxidermy says of his extensive display of hundreds of different animals from around the world, most of whom he hunted himself.

There are scary lions and bears of course, but there’s also a cuddly mama bobcat playing with her kitten, a fox arching and stretching her back upon wakening from a nap and plenty of graceful birds in flight.

It’s a magical place where visitors can get a realistic impression of wildlife right in the heart of urban Albuquerque. 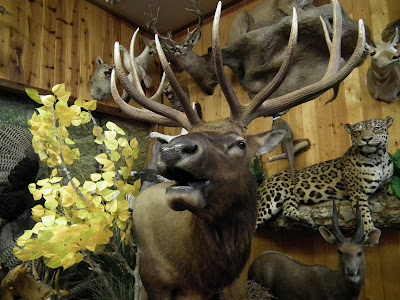 About 3,000 local school kids a year pass through the doors of Gruben’s shop to gaze in wonderment and awe at some 500 mounted animals behind glass display cases, the proprietor says.

Many are children from surrounding Indian pueblos, a lot are 4-H Club and FFA (Future Farmers of America) students and most leave amazed, Gruben says.

Gruben, 67, has been operating at the same location for forty years but got his start in taxidermy as a boy growing up on his family’s cotton farm in Rotan, Texas.

One of seven children — three brothers and four sisters — Gruben learned at an early age how to hunt and trap game animals and then developed an artistic knack for preserving them.

Gruben went on to attend Texas Tech University in Lubbock where he met and married his wife of 46 years, Alice, and then graduated in 1966 with a degree in animal science. The couple has two daughters, Dyanne and Deborah, who also live in Albuquerque.

Gruben, who followed in his father’s footsteps and entered the agriculture industry, started out as farm manager, overseeing livestock operations until he met and went to work for Jimmie Dean, the famous singer, actor and sausage maker.

Gruben managed Dean’s packing plant in Plainview, Texas, for several years until he decided to indulge his hobby and become a taxidermist.

Gruben then discovered a taxidermy shop was up for sale in Albuquerque and moved to the Land of Enchantment where his business has flourished ever since.

When’s he’s not working, Gruben can usually be found hunting, either in his adopted home state, Alaska or his favorite destination, South Africa. 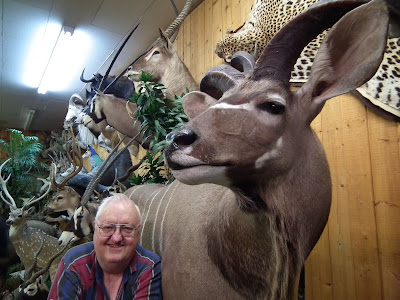 Most of the mounts found in Gruben’s display cases were taken by him, including his favorite African safari trophy, a Greater Kudu, with its massive spiral horns and impressive size and markings.

There are many others, too, including a big, black, water buffalo, a rhino with a great horn and dazzling, stripped zebras.

Gruben’s shop also features a diorama behind glass representing a marsh scene in which various fish can be seen gliding about underwater while overhead, birds and other animals abound.

Gruben said he had hoped the city’s natural history museum would use some of his mounts for displays but when they didn’t, he built his own inside the shop for the public to enjoy.

Anyone is welcome to stop in, view the displays and ask questions, Gruben says.

Gruben says the art of taxidermy has come a long way since his early days in the business when the process was much more time consuming and laborious.

Nowadays, the mass production of glass eyes, specific to certain animals, has negated the need to painstakingly paint glass marbles to imitate an animal’s natural look.

And pre-formed and made to order foam bodies have replaced the need to arduously sculpt and shape a replica of an animal’s body with paper and other materials, Gruben says.

That’s good news for a shop that endeavors to process 30 mounts a week during the busy hunting season of September through January, he adds.

Nonetheless, one thing that hasn’t changed is the artistic talent one needs in order to succeed in the profession.

For example, the use of high quality paints and easily carved foam bodies has much improved the end result in the traditional mounting of a fish.

But accurately preserving a fish and honoring its appearance requires a trained eye and the skilled application of several coats of various paints to attain the depth and luminosity the fish once displayed, Gruben says.

Gruben notes that the business of mounting a fish has definitely evolved with the times as anglers can now have a replica of a fish they have “caught and released” built to exact specifications using measurements such as girth, length and weight.

A real good photo comes in handy, too, Gruben says.

One aspect of the business Gruben does not like to indulge customers in is the mounting of dead pets.

It is very difficult to mimic the look of a live, loving pet that once had been seen and enjoyed for many years as compared with a wild animal whose actual appearance may be a mystery to many, Gruben says.

“You just can’t put the life back into them,” Gruben says with a shake of his head.

Thus he tries to talk people out of it, but still ends up doing a few every year.

One of the unforeseen pleasures of his business of late has been the use of many of his mounts by the movie industry including those seen in the bar scene of the movie “Wild Hogs”.

“Just about every movie shot here in the last ten years we’ve rented to,” Gruben says.

“That was pretty cool,” he says. 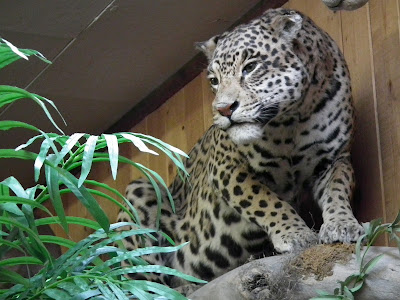 Gruben says he still likes to hunt here in New Mexico when he gets the chance, noting the Gila for its trophy elk, the Lordsburg and Silver City area for its javelina hunting, the Bootheel for its diminutive Coues deer and Caracas Mesa near Dulce for trophy mule deer.

Gruben, named after his father, Danie, which accounts in part for his use of the initials D.L. before his last name, says he also enjoys working with photography and is building a website to feature photos of his many mounts.

IF You Go: From Santa Fe take I-25 south to Central Avenue in Albuquerque. Head east past the University of New Mexico and through Knob Hill to just past the La Hacienda restaurant and look for American Wildlife Taxidermy on the right at 4410 Central Avenue, SE,  just before Ron Peterson’s gun shop.
Posted under Uncategorized
Comments Off on Taxidermy Shop in Heart of Albuquerque a Wild Adventure