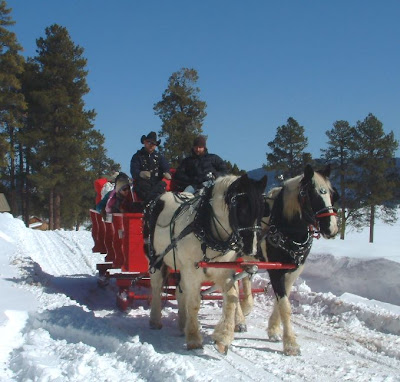 Sleigh driver Jeff Grider of Bear Creek Adventures and passenger, Rourke McDermott, Landscape Architect for the Valles Caldera National Preserve,  ride atop the a horse drawn sleigh at the preserve in the Jemez Mountains during a recent outing.

A brilliant bed of deep, creamy snow awaits visitors to the Valles Caldera National Preserve this winter where cross-country skiing, snowshoeing and sightseeing is at its best right now.
“You couldn’t ask for better conditions,” says Kimberly DeVall, Recreation Specialist for the preserve. “We’ve got about three feet of snow on the ground and another full moon night coming up.”
The preserve is scheduled to be open to cross-country skiing, snowshoeing and sightseeing under the full moon on Saturday night, Feb. 27, Devall says.
“It’s spectacular seeing your shadow at nine o’clock at night,” DeVall says of the moon-lit 90,000-acre preserve located off State Road 4 between Los Alamos and Jemez Springs.
The last full moon event on Jan. 30 which features campfires and hot beverages and snacks at the visitors’ center drew about 300 outdoor enthusiasts to the preserve.
Weekend and special event visitation so far this winter has passed all of last year’s total for the entire season, says DeVall.
Last year the preserve saw 1,814 visitors during the winter season and earned $12,474 while this year, with several weeks still yet to to go, the preserve has already seen 2,979 visitors and earned $31,699 in revenues.
“We’re really starting to come into our own as a winter recreation destination,” DeVall said of the big jump in visitors.
The preserve boasts 38 miles of winter trails with 29 of those groomed for cross-country skiers, ranging from an easy 1.5-mile loop to a more adventurous 15k circuit, DeVall said.
Those seeking the kind of quiet solitude only a wide expanse of snow-covered pasture and deep forest can provide should head up to the old “ Baca” location for some winter recreating while the snow is still around.
During one recent sunny weekend one could see many cross-country skiers and people on snowshoes dotting the bright white layer of snow covering the massive expanse of pasture formed by the collapsed volcano known as the Valles Caldera.
“We usually do the Sandias (mountains) but decided to try something different this weekend,” said Brain Schwaner, 45, of Albuquerque and an employee at Sandia National Labs. “This is so much easier and more scenic, I’m surprised there aren’t more people here, it’s a great place to learn the sport.”
Schwaner’s skiing partner, Michael West, 51, a cardiologist from Albuquerque, was impressed with the preserves’ stunning beauty and the gorgeous weather that day.
“Just fantastic,” he exclaimed while taking a break from the trail. 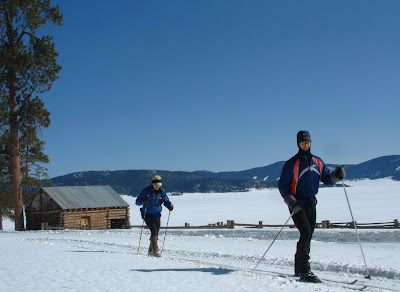 From Left to right,  Michael West and Brian Schwaner,  both of Albuquerque cross country ski at the Valles Caldera National Preserve during an early February weekend.

And drifting along upon a cold, clean mountain breeze one could detect the musty aroma of horses, leather and the tinkle of  bells as visitors enjoyed an old fashioned sleigh ride through the  snow covered woods and fields of this awesome public preserve.

“People really enjoy this ride,” said Jeff Grider, 34, of nearby La Cueva, as he quietly coaxed his team of Pinto Draft horses, Moonie and Molly, to pull a gently swaying sleigh along a road cut through the snow.
In the back, about a dozen visitors bundled up in blankets, snapped pictures and chatted excitedly as a tour guide provided details about the preserves’ history, wildlife and other attractions.
Vern Loose, 66, of Albuquerque said after the sleigh ride he was amazed at the preserve’s beauty.
“Being out in this is absolutely spectacular, “ he said. “I just love the combination of the sunshine and the snow.”
The last weekend to take a sleigh ride at the preserve is the weekend of Feb. 20 and 21st . Check the preserve’s website at www.vallescaldera.gov for available reservations and other information about visiting.
Grider said the preserve remains essentially the same as it did when as a youth he used to visit his uncle who was the ranch caretaker for the Dunigan family of Texas who owned it and later sold it to the public.
The vast herds of elk, the great fishing in the little creeks feeding the East Fork of the Jemez River and the Rio San Antonio and the spiraling flocks of bald eagles can all still be enjoyed by those visiting the preserve during warmer months.
But in the middle of the winter it is the cold, quiet remoteness of the preserve that stirs memories of snowmobile trips to the ranch where his uncle would be working to carve out the road so the Dunigans could come visit.
“He’d spend days on it,” said Grider, who is a firefighter during the summer and does some ranch work himself. 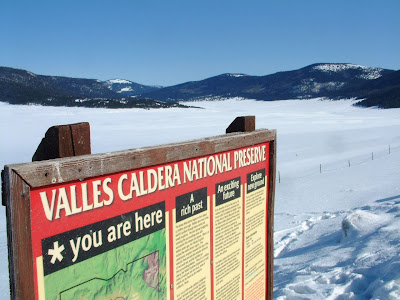 Nowadays visitors to the preserve will still find the road into the preserve covered in snow and flanked by high drifts but it is easily managed in four-wheel-drive and an experienced winter driver can probably handle it in two if they just kept rolling and avoided the soft edges.
Visitors to the preserve will find a new visitors’ center just a couple miles in off the highway where snowshoes are available for rent along with other goodies like lip balm and some snacks and beverages.
Those wishing to cross-country ski need to bring their own gear. The cost of admission is $10 and no pets are allowed.
If You Go:
From Santa Fe head north on US84/285 to Pojoaque and take State Road 502 to White Rock and then follow State Road 4 up through the mountains and upon emerging into a great, open area look for the entrance to the preserve on your right, further down the road, about 65 miles. Make a round trip of it by continuing on State Road 4 through Jemez Springs and Jemez Pueblo to State Road 550 for a quick drive down to Bernalillo and then back up to Santa Fe on I-25.  Great green chile cheeseburgers can be had in a classic New Mexico bar, the Los Ojos, in Jemez Springs.
Posted under Uncategorized
Comments Off on The Valles Caldera Offers Sleigh Rides, Cross Country Sking, Snow Shoeing and More