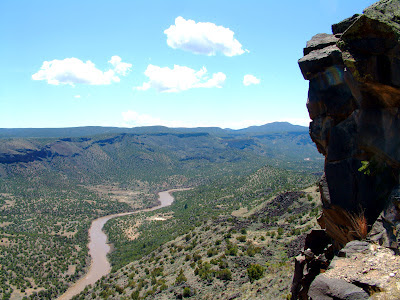 High above the Rio Grande the overlook at White Rock offers a dizzying view of the canyon below and for some, all the motivation that’s needed to take a hike into the rugged country found down there.

Located in the sleepy, little bedroom community of White Rock, the overlook provides a jump-off point to the canyon below and also offers visitors a spectacular view of Santa Fe’s backyard.

From the overlook visitors can see across the river to where Buckman Road and Camino La Tierra ends at the river and the snow-capped peaks of the Sangre de Cristos that tower over Santa Fe.

But it is in the canyon below that visitors can find evidence of the ancestors of local pueblo Indians who lived, farmed, hunted and left their drawings of wildlife and other things carved into the smooth, dark basalt rocks found in the canyon.

Hikers will find two marked routes into the canyon, the blue and red dot trails; both steep, rocky climbs covering about a mile and dropping about 800 feet into the gorge. 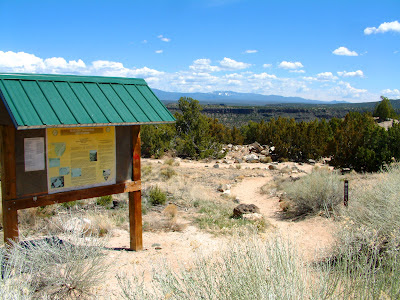 The blue dot trailhead and information kiosk can be found near the overlook in a small parking lot adjacent to a grassy playing field.

The red dot trailhead is accessed off Piedra Loop found on the other side of town in the La Senda subdivision located across Pajarito Canyon from the overlook.

The red dot trail leads to the springs and waterfall and features many petroglyphs along the way.

Hikers wishing to make a round trip into the canyon utilizing both trails will cover about three miles along the river before heading back up, and out, on either trail. 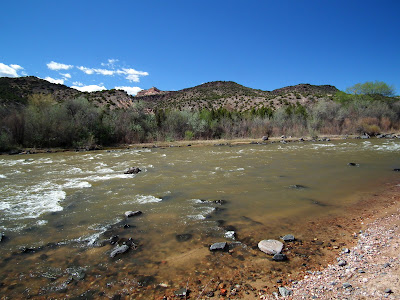 A roundtrip hike will require a secondary ride or other arrangements to return to the original starting point.

Those seeking a less strenuous outing can utilize the canyon rim trial originating at the overlook and which meanders along the rim.

Extreme caution is advised while exploring the rim trail due to the steep cliffs, high winds, loose rocks and other potential hazards such as rattlesnakes, cactus and environmental exposure.

Contact Craig Martin, Open Space Specialist for Los Alamos County for more information at 505-663-1776 or by email at craig.martin@lacnm.us .

Visitors can also stop in at the White Rock Visitors Center just off State Road 4 on Rover Boulevard for a map and more information. They’re open seven days a week from 9 to 4 P.M. during the spring, summer and fall.

At the center visitors can also learn more about the interesting history of the community of White Rock, born as an Atomic Energy Commission (AEC) town for construction workers building the labs at Los Alamos, birthplace of the first atomic bomb. 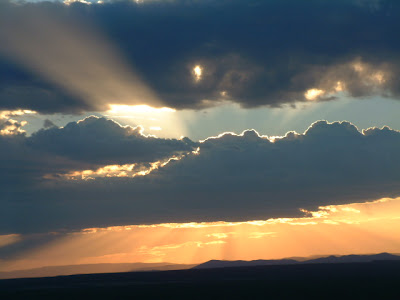 The temporary town established in 1949 was built entirely of prefabricated materials including over 400 homes, dormitories, trailer spaces, two schools and stores, according to a historical brief written by Elizabeth Aiello, a school teacher at the time.

She also reported such retail spots as a grocery market, drug store with counter service, a barber shop and beauty salon, a liquor store, hardware store, The town also had a police and fire station, according to Aiello.

But by 1954 construction at Los Alamos was winding down and the town of 2,000 residents was dismantled piece by piece. Within five years it no longer existed and local teenagers from the valley used the weed-choked highway there as a drag strip.

But then in 1960 the AEC sought bids for the “redevelopment” of the White Rock and today visitors can now drive through a town that looks like it was lifted straight out of the “Leave It To Beaver” show and boasts a population of about 6,000.

Take U.S. 84/285 north to Pojoaque and follow St. Rd 502 to the intersection of St. Rd. 4 and follow the signs to White Rock. At the traffic light turn left onto Rover Blvd. The White Rock Visitor Center is located in the strip mall on your right. Turn left on Meadow Lane to go to the overlook park. About 35 miles, one way.