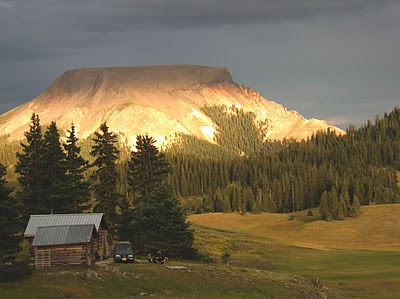 It sits high atop the San Juan Mountains overlooking a wide meadow of lush grass and wildflowers, a 100-year-old, one-room log cabin from which the world seems a long ways away.

And on a summer’s eve, seated on the front porch of Elwood Cabin, one might hear sheep bawling in the surrounding woods.

A wisp of smoke might be seen curling up from the sheepherder’s camp hidden deep in the trees while the setting sun lights up the rusty colored mountain towering over the horizon.

Then the rain begins and amid the soft warm light of the cabin’s propane lanterns, visitors play cards across the red-and-white checkered kitchen table cloth. 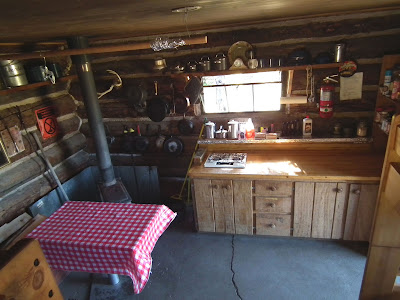 Outside the thunder and lightning is of little concern to those sleeping inside this sturdy little cabin and the following morning should bring bright sunshine and steaming grass.

Now while sipping coffee on the front stoop a visitor might hear the cry of a hawk as it circles overhead and perhaps, finally see the sheep as they cross the meadow, their shepherd patiently watching from astride his horse. 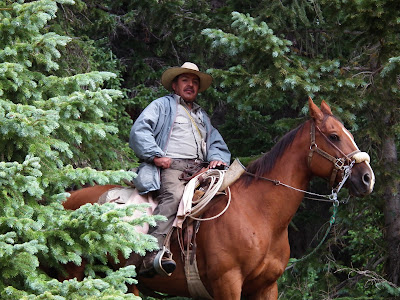 And roving among the ever-shifting flock would be two Great Pyrenees; big white shaggy dogs whose job is to deter predators like coyotes, lions and bears.

Scurrying about the edge of the herd, the more familiar border collies will be quickly and efficiently moving the sheep at the shepherd’s direction.

One can learn a lot about sheep at 11,000 feet with little or nothing else to do. 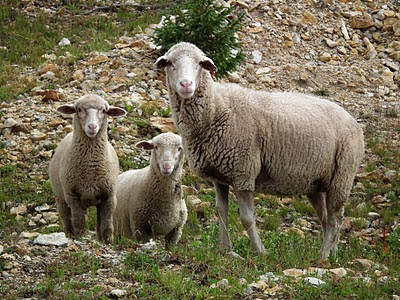 And that may ultimately be the real beauty of this place, its ability to reconnect visitors with nature and perhaps, what is the real world.

Sitting in a saddle along the southern spine of the Rocky Mountains, Elwood Cabin was built in 1911 as a line shack for crews servicing a transcontinental telephone line.

The phone line has long since been abandoned, but today visitors can reserve a night at the rustic, Forest Service cabin for a minimal fee and enjoy scenery that rivals anything to be found at pricier lodges. 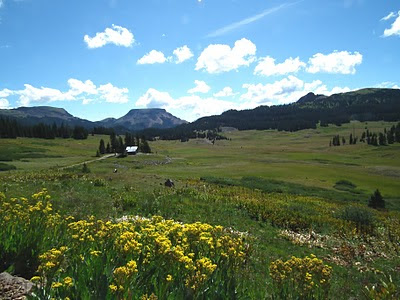 The surrounding high altitude countryside provides a backdrop that encourages contemplation and exploration.

Nearby is the ghost town of Summitville where gold was first discovered in 1870 and then mined until the early 1990s when contaminants leaking off site flowed into the local watershed and the government forced it to shut down.

A publicly funded water treatment plant now dominates the site as part of a federal clean up and its presence is a stark reminder of the hazards of unregulated, industrial, environmental, activity.

Other activities in the area include an abundance of wonderful drives across well-maintained, gravel Forest Service roads, none of which require four-wheel drive.

One can traverse the mountain and drop down to Platoro Reservoir which feeds the Conejos River and provides excellent fishing over many miles of open water. And the nearby town of Platoro, during the summer months, provides plenty of services including gas, food and groceries.

But after consulting a map or two, the area spans both the Rio Grande and San Juan National Forests, one might want to instead head the other way.

Maybe take a day trip down to Pogue Lake, an appealing, high country setting where a thriving population of cutthroat and brook trout will rise eagerly to a fly trailing behind a bubble. 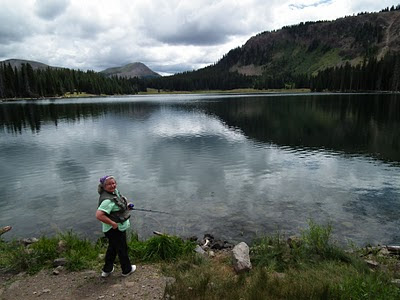 Hiking trails also abound in the area but the thin, high mountain air might tax those unaccustomed to the altitude and its effects, so plan accordingly and acclimate first.

By day’s end, returning to Elwood Cabin may be the best part of visiting these mountaintops.

Upon opening the locked gate on the road to the cabin one might experience a sense of ownership that soon turns to communal pride of this public facility that anyone can enjoy. 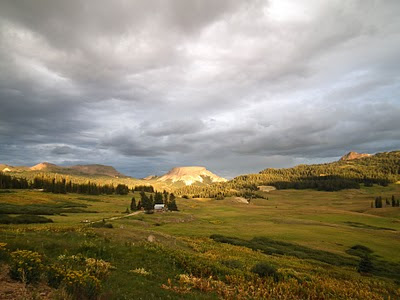 Journals kept inside the cabin provide entertaining and informative accounts of visits by others who have stayed in the cabin and express similar views.

One wrote that her love for the cabin and its scenery was so intense that she got married and honeymooned there. She wrote of spending a day fixing up the cabin like it was her own.

Others wrote of making an arduous journey to the cabin during the winter months where an adjoining shed full of cut wood and the cabin’s little box stove made for a warm and comfortable stay.

But perhaps the most often mentioned items were those involving wildlife sightings ranging from deer, elk, bears, the resident marmot and, of course, the chipmunks, who make the cabin grounds their home. 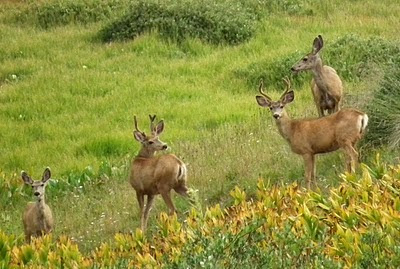 Visitors should be aware that the road to the cabin is snowed in most of the year except for several months during the later summer and early fall.

There is no water provided so visitors must carry in what they’ll need, at least five gallons for a couple of people over the course of two or three days.

The cabin kitchen is well stocked with cooking and eating utensils and guests frequently leave behind other supplies like salt and pepper, kitchen matches and canned food.

All trash needs to be packed out and visitors should leave the cabin as they hope expect to find it.

The cabin features two bunk beds with folding frames and thin futons on the bottom that can be made into a small sofa. The top bunks are equipped with traditional mattresses which when placed on the bottom frame with the futon folded up against the back wall make for a cozy nest and good night’s sleep.

Those who would like to stay at Elwood Cabin can make reservations up to six months in advance on the website www.recreation.gov where one can learn more about it and other cabins available to the public. 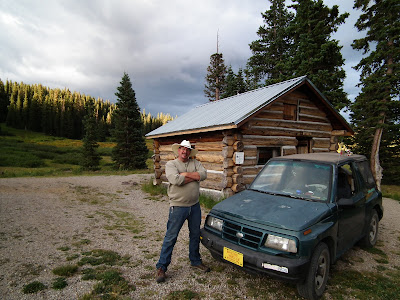 From Santa Fe one can reach the cabin from many different directions including by US 84/285 to Espanola and then take US 285 to Antonito and on through La Jara to the turn off to Capulin on St. Rd. 15. Follow to Forest Road (FR) 252 and Terrace Reservoir. Turn onto FR 250 and take for another 20 miles to FR 380 and follow for nine more miles to the cabin.

Those who prefer sticking to pavement can bypass the Capulin turnoff at La Jara and just continue on US 285 to Alamosa and follow US 285/160 through Monte Vista, Del Norte and then on to South Fork. Stay on 160 towards Wolf Creek Pass and take FR 380, also known as Park Creek Road, all the way up to the cabin. This same route can also be taken by those who want to travel through Chama and Pagosa Springs. The cabin can also be found by those coming over the mountains from the Conejos River and Platoro Reservoir by way of Antonito or Chama. Either way, it’s all good.