Santa Rosa Lake Headed for Dangerously Low Levels But Efforts May Save Some Fish. 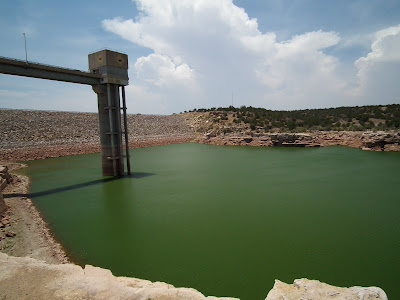 Santa Rosa Lake is expected to drop to perilous levels as downstream agricultural irrigators call for their water later this month but this time they hope to leave enough behind to help keep the popular fishery alive.

About ten years ago the district found itself in hot water during similar drought conditions after its call for water left another reservoir downstream of Santa Rosa, Sumner Lake, drained dry.

Santa Rosa is the first in line of three reservoirs on the Pecos River that serves the Fort Sumner and Carlsbad Irrigation Districts with Sumner in the middle and Brantley at the end of the line.

Jones says he will ask his board of commissioners at a June 14 meeting to authorize leaving about 9,000 acre feet in Santa Rosa Lake to keep the fishery alive while also providing farmers with just enough water to get by.

“We all have to make sacrifices in these lean years,” he said.

is currently holding only about 21,000 acre feet or about 8 percent of capacity, due to little or no snowpack runoff this year in the watershed, says Curtis McFadden of the Army Corps of Engineers which operates the dam at .
That could conceivably be wiped out and the lake reduced to a trickle in the streambed if the irrigation district takes its usual June allotment of 20,000 acre feet.

But this year Jones is proposing to limit the district’s demand for irrigation water to help out the fish and wildlife and those who enjoy them.

And on top of that Jones proposes that the district not take delivery of that water until July 5th so people can enjoy the water over the Fourth of July weekend.

Yet, despite those best efforts, the fishery at Santa Rosa Lake is expected to take a big hit when the water is drawn down, one that could takes years to recover from, says Shawn Denny, Southeast Area Fisheries Manager for the state Department of Game and Fish.

“It’ll be significant,” he says.

But based on past experience, when Santa Rosa drops to such levels many fish will flow downstream to Sumner Lake along with the water delivery thus improving fishing there.

However, Sumner Lake is currently closed to boating due to the discovery of invasive mussels that can spread to other waters on boats.

But Denny notes that Sumner Lake may be one of the best shore fishing lakes in the state and with an expected influx of walleye, bass, catfish and crappie from Santa Rosa, could be the hot spot for bank based anglers here shortly.

Jones says the district is expected to leave about 7,200 of the 11,000 acre feet it has stored in Sumner Lake for the time being. Of that at least 2,500 acre feet will have to remain for a minimum pool to keep the fishery there and an endangered fish population in the Pecos River alive.

Denny says there may be a positive side to the water levels dropping at Santa Rosa in that the lake shoreline will be exposed and new vegetation should sprout. If that vegetation is then re-submerged by water it creates excellent habitat and nutrients for fish to thrive.

In the meantime everyone seems to be praying for rain and if past years are any indication the state could possibly see an early and wet monsoon season.

In many past La Nina weather seasons which produce abnormally dry winters, the following summer monsoons seasons have produced above normal rainfall, says Daniel Porter of the National Weather Service in Albuquerque.

“Typically that statement would be fairly accurate,” he noted. “But…”

It seems that the service’s weather forecasts are hedging its bets and isn’t predicting anything this year other than a normal monsoon seasons.

Even that would be welcome relief for farmers in the Carlsbad area, who got a tantalizing trace of rain just this week, the first they’ve seen in over 225 days.

McFadden says an early and wet monsoon season could add anywhere from 12,000 acre feet of water to the lake and that would alleviate a lot of the problem.

If You Go: Santa Rosa Lake State Park is located southeast of Santa Fe on the eastern plains. From Santa Fe take I-25 towards Las Vegas. Head south on either U.S. 285 at Eldorado, State Road 3 at Villanueva or U.S. 84 at Romeroville. All three intersect with I-40 which heads west to Santa Rosa.

The lake can reach up to 3,800 surface acres when full and offers angling for both large and smallmouth bass, walleye, crappie, catfish, perch, sunfish and some trout.

The park offers several campgrounds including developed sites, many with electric, some primitive, a dump station, restrooms with showers, boat ramps, hiking trails and a visitor center and observation tower by the dam.

Nearby Conchas Lake on the Canadian River remains low after years of drought while further east at Ute Lake the water level is good. Both locations offer good fishing, boating and other recreational activities.
Editors Note:
6/15/2011
The Carlsbad Irrigation District Board of Directors has voted to leave about 9,000 acre feet of water in Santa Rosa Lake and another 6,200 acre feet in Sumner Lake to help maintain the popular fisheries during the ongoing drought, said District Manager, Dudley Jones.
The water in Santa Rosa Lake is owned by the district as is much of the water in Sumner Lake and could have been drawn down for irrigation purposes but during a June 14 meeting the district’s directors elected instead to leave the water in the lakes to benefit fish and recreational users.
A large amount of water will still be moved downstream during a planned released after the Fourth of July weekend but dam operators will leave the allotted amount behind to keep the two lakes wet while everyone prays for an early and heavy monsoon season to arrive, Jones says.
Sumner Lake will now be reopened to boats after it had been closed due to invasive mussel contamination. Boats will now have to undergo an inspection and decontamination process before being allowed back on the lake starting Friday, June 17.
Posted under Uncategorized
Comments (2)

2 Responses to Santa Rosa Lake Headed for Dangerously Low Levels But Efforts May Save Some Fish.