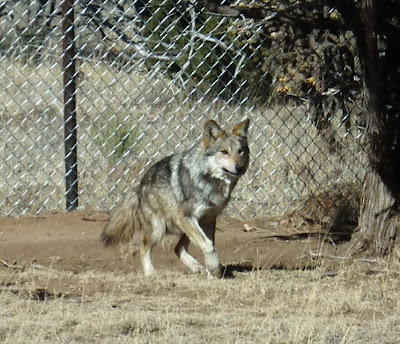 If it’s wolves you’re looking for, then the Wildlife West Nature Park in Edgewood is a good place of find them, along with plenty of other enlightening and entertaining animals.

The 122-acre park offers sanctuary for wildlife that for one reason or another could no longer survive on their own.

And for a lucky few, they have found a comfortable, natural, environment where they can live out the rest of their lives while also serving to educate and entertain the public.

The non-profit nature park is the lifework of Roger Alink, a Vietnam era Army veteran and retired high school shop teacher and host of some 4,000 school kids each year on field trips.

Alink proudly notes that the park may be the world’s only zoo constructed entirely by youth, many of whom were Youth Conservation Corps members.

Alink, who earned a bachelor’s degree in industrial education and a master’s degree in outdoor recreation, both from the University of New Mexico, believes most kids these days suffer from “Nature Deficit Disorder.”

Alink, who grew up on a farm in Minnesota, did his best to combat that condition among his students while serving as shop teacher for Albuquerque’s Valley High School, where he ran an after-school stock car racing club and a mountaineering club.

The clubs helped give kids confidence, experience and skills they’d need in the outside world.

Alink, 63, is married to Terrie and is the father of two of his own children. His son, Brian, works in finance in Dallas and his daughter, Emily, is an industrial designer living in Seattle. Alink is the proud grandfather of six.

But Alink had an even bigger dream for helping kids, and that’s why he undertook creation of the nature park. 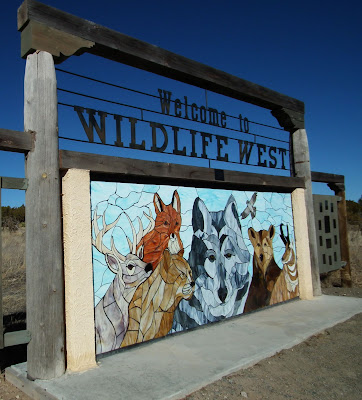 It’s a place where “education, nature, and hands-on experience with everything from animal husbandry to construction and conservation, provides a unique learning and development experience for young people,” Alink states on his website at www.wildlifewest.org.

During a recent visit to the park, Alink, a licensed contractor, pointed out how many of the park facilities incorporate recycled materials including animal enclosures made out of used tires encased in stucco.

The park’s amphitheatre is constructed of steel beams, poles and siding recovered from a defunct Albuquerque nursery.

There’s a water catchment and containment system to provide additional water for the facility, gardens that produce vegetables for the animals and even a small pond and wetland area to provide natural habitat.

Alink notes out that many of the park’s animal enclosures incorporate native trees, rocks and other features which provide the animal with a natural environment in which to live.

Feeding too is done in such a manner as to encourage the animals’ natural tendencies, such as placing meat in a tree to encourage climbing or hiding it to stimulate an animal’s problem solving abilities.

What’s apparent during a visit to the park on a quiet, late winter’s day is how well cared for and happy the animals appear. 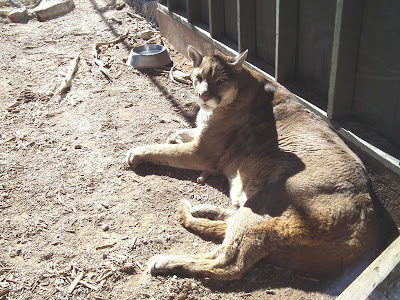 An antelope approaches a visitor and beckons to have its head scratched and its rubbery horns wrestled with. A curious javelina comes out of its hiding spot at the sound of a human voice and ambles over to the plastic viewing window to find out who’s there, sniffing heavily around the window’s seams.

There’s a perky looking but aloof bobcat, much too intent on watching something off in the distance to pay a visitor any mind.

And behind another plastic window in an enclosure lounges a luxurious mountain lion in the dirt while a sleepy bear with an inquisitive nose greets Alink and his visitor this balmy winter’s day.

The park has a large contingent of raptors and other birds under its care, including a colorful pair of Crested Caracaras, the national bird of Mexico, and a one-eyed golden eagle kept in a large screened enclosure where it has some room to fly.

Other birds include owls and even a turkey vulture.

But it’s the recent addition of three young male wolves that really has the park buzzing as the spirited group grows accustomed to their new home.

Members of a pack raised in captivity for eventual release by the United State Fish and Wildlife Service (USFWS), the three never made it into the wild and were instead moved to the nature park to make room for others in the release program, according to Tom Buckley, Public Affairs Specialist with the USFWS in Albuquerque.

Those interested in hanging out with the wolves need not venture all the way into the Gila Wilderness to do so as visitors to the park in Edgewood can spend a night in a “blind” where they can unobtrusively observe, photograph and listen to the animals.

“If you spend the night, you’ll hear them and it’s pretty special,” Alink says.

Photographers have shown a lot of interest in the new pack and the blind operation, he added.

Visitors can also spend the night at the mountain lion enclosure and both programs are part of many innovative ideas the park utilizes to support its operations.

The park plays host to a wind festival in May featuring kite flying, then there’s the Hammers and Hooves Horse Fair and Blacksmith Competition in June and a highly popular summer music festival in July and in the fall a harvest festival.

The park also provides regular classes for the park’s many volunteers and members of the public including bird handling and animal keeping, there’s a summer camp for junior zoo keepers and guided educational field trips to the park.

The park has facilities for rent and Alink, the executive director of the operation, is always open to new ideas. More info about the park and its many programs can be found on its website at www.wildlifewest.org.